Here is a new pothole. Damaged my tire tonight  (January 26) 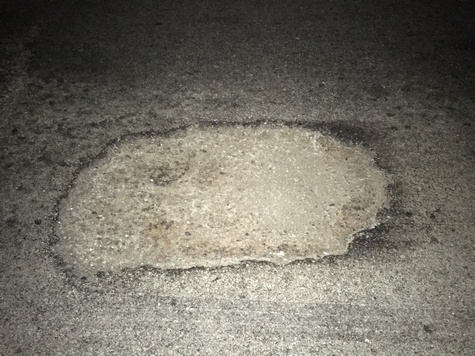 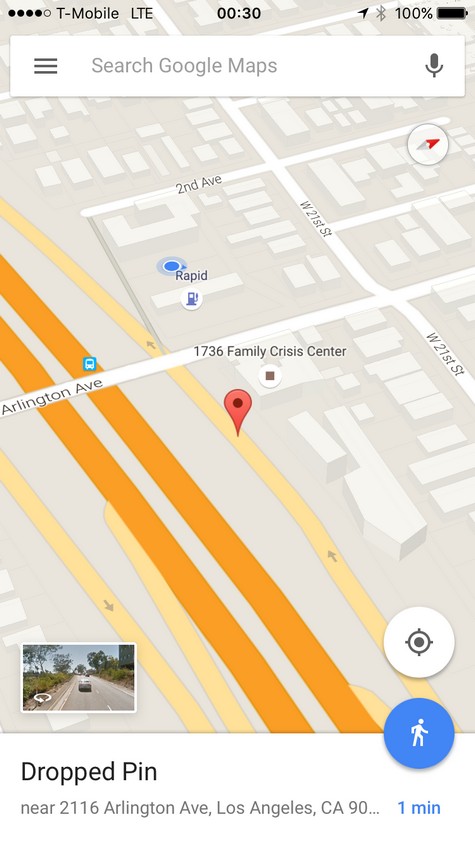 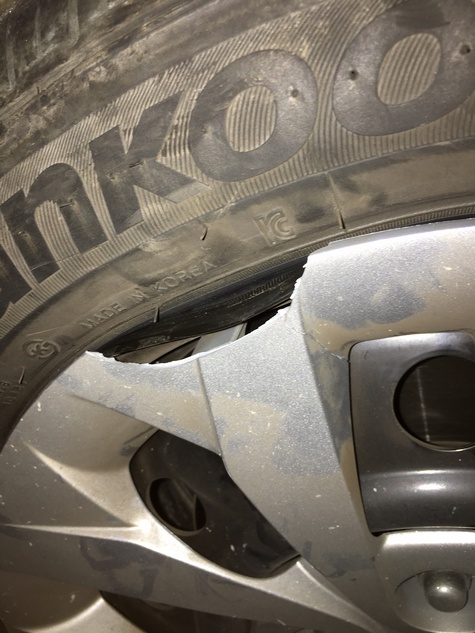 On January 12, 2016, Simon Classen reported this pothole at 401-407 S. La Cienega Blvd. (near the intersections of La Cienega and Burton Way/San Vicente):

It broke the tires, rim and the alignment on my brand new BMW 650i. Approximately $1000 in damage.

Length of time it’s been there: Noticed it today.

The September 10 issue of LA Weekly weighed in on Los Angele’s never-ending struggle with potholes and horrible streets. Here’s the opening of the their article, penned by Hillel Aron. You can read it in it’s entirety here.

Perhaps the nicest thing you can say about Los Angeles streets is that they may, in fact, not be the worst in the nation. However. Driving is such a fundamental part of most people’s lives, it’s easy to take every crack, pothole and bump as a personal affront, not to mention a financial burden.

According to the blog L.A. Potholes, a great chronicler of some of our city’s worst patches of road, Los Angeles drivers spend an average of $693 a year to repair vehicle damage caused by our messed-up roadways. Some drivers file claims against the city — but according to a 2013 report by KPCC, the city pays out on only 10 percent of claims.

What’s a driver to do? We’d recommend a few defensive driving tips: Avoid the far right lane, which gets torn up by buses. Slow down when the ground below you seems to crunch. And avoid these 11 hazards. 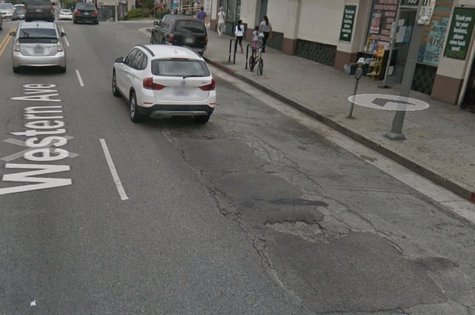 Destroyed my wheel and splashed tar all over the wheel well … not sure if they just badly filled it but felt like it bottomed out.

Size: Big enough that it gouged my tire and scraped my rim.

Length of time the pothole has been there: We never drove in this area before so I don’t know.

I found the location on Google Maps, a street level photo dated July 2015, at 983 Western Ave., and it looks like possibly the one.

If so, it’s definitely worse now.

This pothole is located in the alley behind Treats for the Face, Cafè De Mèxico and Goodwill in Sherman Oaks. I believe the heavy trucks from Goodwill are the cause of this problem. This pothole is 3 feet long and is very deep. I think I left my suspension there. 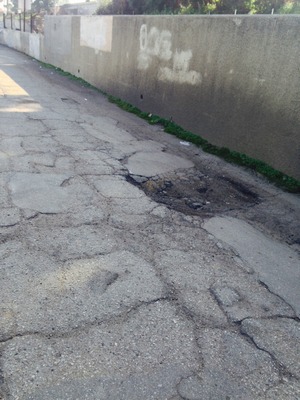 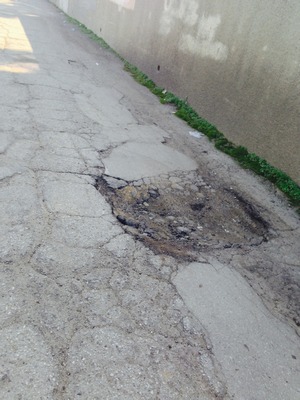 This location is in the city of Los Angeles. The whole street belongs to the city of Los Angeles. In the fourth picture, the building next to the white vehicle is an auto repair shop. I spoke with the owner and he said the city of South Pasadena and Los Angeles have been disputing the responsibility for this huge pothole. On 12/24/11, as I exited this driveway, the front end of my Audi sank in the pothole that was filled with water, causing $1,000 in damages, snapping my drive belt pulley. I also needed a new skid plate and motor mount. I filed a claim with South Pasadena, which they denied because they said the street belongs to Los Angeles. I filed a claim with L.A., but they denied it. To this day the pothole remains the same. Date: 12/31/11 Location: 1000 Kendall Ave., South Pasadena; the street up to the curb is the city of Los Angele’s Approx. size: very big and deep Length of time it’s been there: 7 years or longer From:  René Uribe 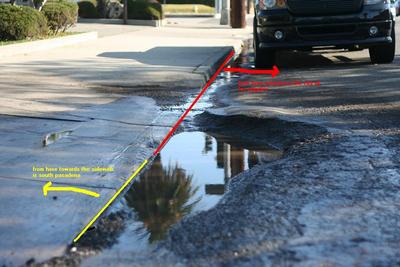 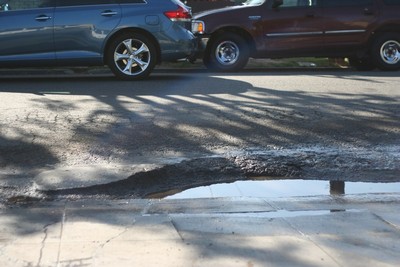 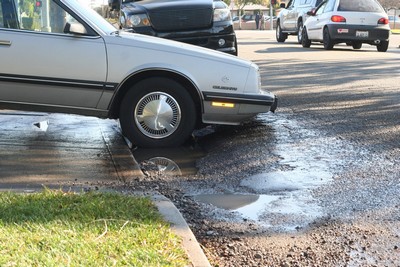 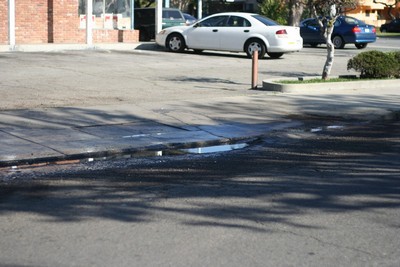 The attached pics are from a pothole in the alleyway behind Darlington Ave. between Barrington and Granville; Zip 90049. The hole measures 6 feet by 4 feet with a gradient depth of over 1 foot. I have called and e-mailed as have neighbors. This pothole has been patched but never properly repaired for the last few years. It is a real problem for the people who must drive through the alley.

I appreciate whatever help you can supply. Thank you for your attention to this matter.

Mauvi: I assume you have called the Bureau of Street Services, as well as e-mailing them and filing a complaint at their website. If you have, call, e-mail and file a complaint again — but this time indicating to them that if a car hits the pothole and loses control, it could damage property as well as any pedestrians in the alley or nearby. They are very sensitive to the possibility of law suits arising from unattended potholes. Have you called your councilperson’s field office? You might also e-mail him as well as the mayor, if you already haven’t. One last thought — alleys are not a priority given that the city is so backlogged with street repairs. Good luck — and happy New Year. 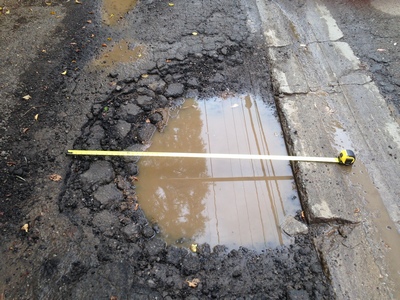 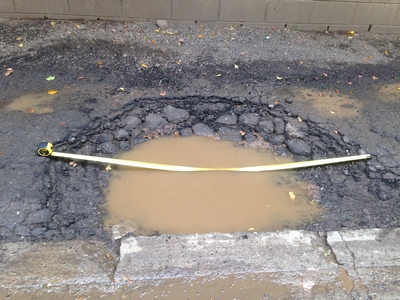 We hate to say we told you so, but according to a report in the Los Angeles Times, TRIP, a Washington, D.C.-based nonprofit that studies transportation data and issues, has rated Los Angeles-Santa Ana-Long Beach as first among cities (with more than 500,000 residents) for the highest percentage of roads in poor condition and the highest annual cost to drivers — which here amounts to $800 per year. This study was based on 2011 data from the Federal Highway Administration. Read the complete L.A. Times story here.

We recently followed up with John Mares, who hit a pothole on Aviation Blvd. back on February 20 (see Aviation Blvd Pothole Causes Rough Landing).

In early July, John told me that “I called them last week, after 4-5 months … they said ‘Our claims take at least 8 months to process … call back in 60 days.'”

On August 6, he emailed me the following: “I finally heard back from the City Attorney, they denied my claim!” I told him to file an appeal.

Call the city attorney’s office and ask them why they denied it. They will talk to you about immunity laws and such. Tell them that you have records showing the city knew about the pothole (John had filed a Public Information request for any pothole reports or surveys they had for Aviation, and the street was repaved a few weeks after the incident, so he knew that the city knew about the bad street)). Email these to the investigator or ask to speak to the head investigator if you’re not getting anywhere. Contact your councilmember and the Mayor’s office as well. If all else fails, you can go to small claims court.

Today (August 13), we got the following from John:

“I was able to speak the City Attorney investigator who denied my claim.

After providing an additional photograph of the pothole and explaining my presumption that because the road was repaved within weeks of the incident that the City had to have prior knowledge of the condition, they have reversed their decision and are now processing my claim.

Per the Investigator, the city ALWAYS DENIES THE FIRST CLAIM.

Thanks for your help, guidance and advice. It looks like we’re done here!”

Jack Khachatrian has reported a major pothole on Hyperion Ave., just before the Glendale-Hyperion Bridge in Atwater. The approximately 2-foot by 3-foot pothole, located next to the speed limit sign, has been there for several months. Jack hit the pothole, damaging a wheel and tire. He’s now filed a claim with the city; we’ll keep you posted. 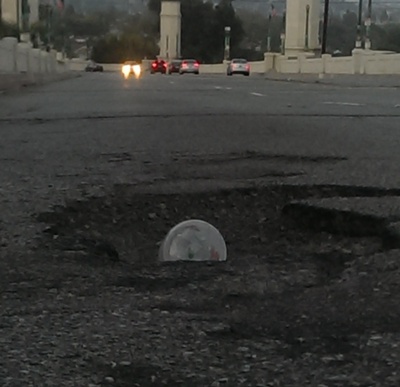 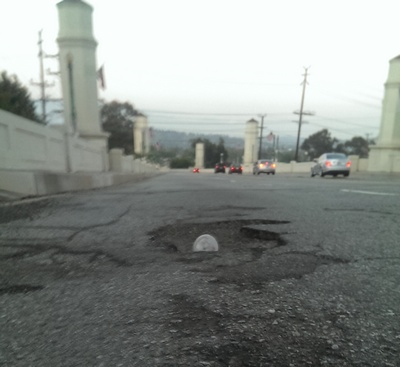 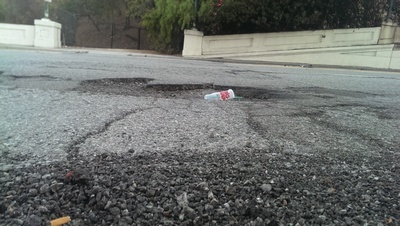 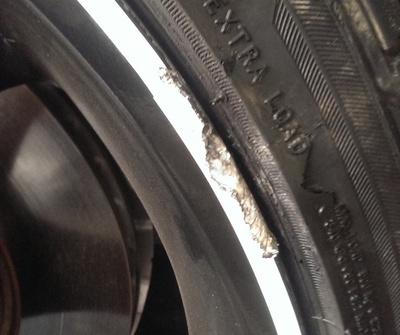