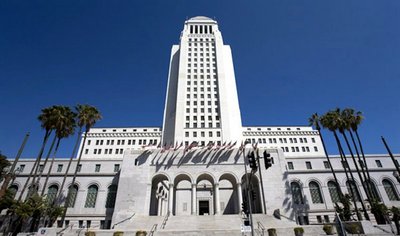 Here’s a great letter from an LAPothole reader delineating her struggles trying to file a claim with the L.A. City’s Attorney Office:”Hi LAPotholes team,

Really wanted to thank you for such a great and informative resource on potholes problems in LA city area.
Here’s my story I really wanted to share with you and other unlucky motorists who have happened to get into potholes at least once.

It’s been almost a year since I started fighting a losing battle with the LA City Attorney’s Office.

I got into a pothole during afternoon rush hour of 9/15/2015 as well as at least 10 other drivers and claimed the damage two days after since I had to take care of replacing both of my right tires the day after the accident. This is where the information you’ve shared on your site came in handy and I’ve filed my claim at lacity.org (thanks again).

Due to some personal and professional business, I hadn’t had a chance to check up on the applied claim up until January, 2016. As a side note, I’ve never heard from the City Attorney’s office during that time either – the claim hasn’t been denied, neither was it approved.

I’ve contacted the Office in January this year just to find out they’re not able to find the claim and was asked to contact them again in a couple of weeks. The back and forth continued for several months and every time I would hear that they either had problems locating the claim or it hadn’t been assigned to anyone yet – “please, call back in two weeks.”

Then again I was out of the game for a couple of months due to a big project at work and got back to bombarding them with calls in May when they finally informed me they didn’t have my claim. They advised I could send them the copy of my claim either via mail or fax. On 6/18/16 I mailed them the copy of my claim together with a copy of the dealership bill for replacing my shredded tires. Checked back with them in a three weeks, and guess what? Correct! They never got my letter (even though I double checked the mailing address with the employee I was taking to several times over the phone). The same day I faxed them my claim, got their confirmation on receiving and had to wait another two weeks until it got assigned to an investigator.

I reached out to the City Attorneys office on 8/1/2016 once again and discovered my claim had been assigned to Mr. Robert Arevalo, who I tried to reach out to during that day with no luck and ended up writing an email which I never got any reply to.

Finally today (8/22/2016) I was able to reach Mr. Arevalo by phone, who told me the fact I didn’t have any photos of the pothole attached to my claim didn’t benefit me and he would need to request street maintenance records, which is going to take another year! to be processed, since they needed a proof the pothole was really there. When I said I had witnesses among other drivers who got into the same pothole right before I did I was told they never got any claims from them (which is really strange because all the drivers I talked to were going to file the claim to get the reimbursement).

As a side note, I really didn’t take any pictures of the pothole since the manhole with a pothole around it happened to be right in the middle of a busy intersection (I got into it while turning left).

This week I’m planning to visit Street Service Bureau’s office and request street maintenance records. As I’ve found out you have to request the records in writing. Decided to go there in person since the letters have a tendency to get lost.

I would really appreciate if you could share my story so other people who’re going through the same bureaucratic Hell on Earth at the moment could read it, find it useful and maybe share some advice.

Keep plugging away, Julia. The key is persistence and documentation — you need to document every email, letter and phone conversation because the City’s Attorney Office “loses” so many emails and letters. Good luck.

There is a giant pothole on Arbor Vita Blvd. east of Aviation and before Barranca in Los Angeles 90045. (Near LAX)

It’s in the far right lane and measures about 4-6 feet in length, 2 feet wide and about 6-8 inches deep.

Observed on July 16 – not sure how long its been there, but looks very worn overall. 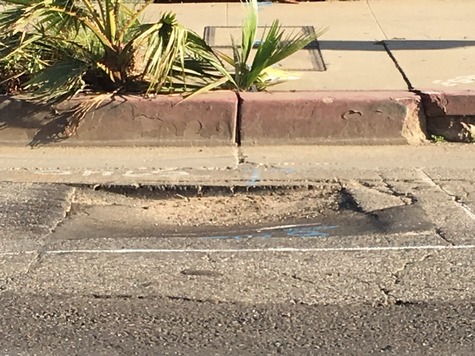