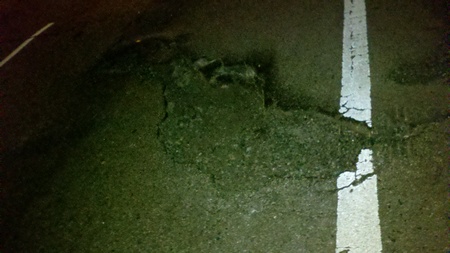 In late August, reader Martin Wolfson, who has been vigorously pursuing remuneration from the city for damages to his car (see below) , sent us the following:

“Despite evidence that the city was aware of the pothole I hit and took no action to fix it, my claim for repairs was denied by City Attorney Carmen Trutanich and investigator Craig Bushey.”

Shortly after that, Pam Teplitz — whose car also was damaged by an encounter with a pothole, sent us the following comment:

“I received a “rejection by operation of law” claim denial today from Mr. Trutanich and Investigator II Richard Wright for damages from a teeth-jarring pothole on La Brea. These rejections appear to be pro forma after 45 days and have to be pursued with a lawsuit within 6 months. Any ideas about how to proceed?”

In the latest update, Mr.  Wolfson successfully won his claim with Los Angeles for damages to his car:

Thanks for all your help. You’re doing a great thing for the people of LA.

I finally got my claim approved. I was going to get my check and then share a guide on everything I did to get it. I’ll share with you what I did and you can post it under your name if you would like.

I wrote the investigator and he admitted he never actually looked at the claim and it was automatically denied. I called his boss and spoke to him.

1. It is very important that you get proof that the City was aware of the pothole before the date of your loss otherwise they can claim immunity. To do this you must contact the Street Services Bureau and request street maintenance records for the block where your pothole is for the last 365 days (the block and direction of travel).

2. If the records show that the city had received a compliant about the pothole you hit, even if they fixed it and it came back, then you have a case. Fill out a claim with the city attorney’s office. They will deny it without looking at it.

3. Once they have denied it, call the city attorney’s office and ask them why they denied it. They will talk to you about immunity laws and such. Tell them that you have records showing the city knew about it. Email these to the investigator or ask to speak to the head investigator if you’re not getting anywhere.

This is what worked for me. It may have been easier just to go to small claims right off the bat, but either way make sure you get records from the Street Services Bureau. Perhaps even street sweeping records could show the city had to be aware. You could even get statements from residents around the pothole to ask how long it’s been there.

Congratulations, Martin. You’re an inspiration to everyone who has had (and will have to) go up against the city.

Here’s the web address for filing a claim with the City Attorney’s Office:  City of Los Angeles Claim for Damages

20 Replies to “Getting the City to Pay for Damages”