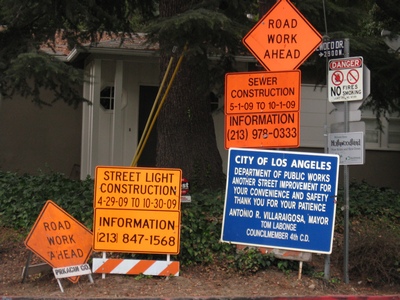 We’ve been trying to document the bad streets of Los Angeles (particularly the West Side. MidWilshire and Hollywood) but there’s so many (and the streets keep getting worse) that our original aim to photograph potholes has fallen by the wayside. All we can do is list the horrible streets we’ve encountered and (as mentioned in the last post) complain to the city.

With the rainy season fast approaching, some streets are definitely going to come more unhinged than they already are (see the city FAQ on how rain can create potholes). The recent spate of sewer upgrades in the city have only added to the problem;  DWP workers are digging trenches to repair/upgrade pipes and then inadequately filling up the holes. We’ve encountered many, many patches and trenches whose fillings have sunk, creating more dips and potholes to wreck our cars. And with the recent spate of water main ruptures, more and more streets will be falling apart.

Potholes at Willoughby and Las Palmas (in fact, as drivers find Willoughby a useful east-west shortcut during rush hour, the street, especially between Highland and Cahuenga, is getting pretty rough)  SOME STRETCHES OF WILLOUGHBY HAVE BEEN REPAIRED

6th between Highland and LaBrea (both directions) (very rough roads)

Overland Blvd. between Santa Monica and Olympic (this is the worst busy street on the West Side)

Virtually every side street between Santa Monica Blvd. and Olympic between Overland and Westwood (we wonder if these damaged streets were caused by construction vehicles during the several-years-long rebuilding of Santa Monica and Little Santa Monica boulevards?)